Whoops, accidental hiatus! But Nicole is here now to talk about the excellent feels heist that is Six of Crows by Leigh Bardugo.

Posted on December 19, 2016 by Nicole DeGennaro

Closing out 2016, Nicole tries to explain why it’s worth crying your eyes out for Code Name Verity by Elizabeth Wein. Check out her feelnalysis below!

OWL reviews: I Am Not A Serial Killer

Posted on December 18, 2016 by Nicole DeGennaro

I am a bad vlogger and blogger who forgot to post this back when La Toya recorded it. Check out her feelnalysis for I Am Not A Serial Killer by Dan Wells.

Posted on December 5, 2016 by Nicole DeGennaro 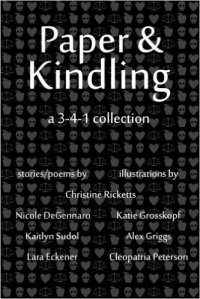 I apologize for the radio silence here for a while, but it has partly been for a good reason. I am excited to announce that now available on Amazon, you can get Paper & Kindling: A 3-4-1 Collection! This contains four short stories by me, each with an illustration, as well as stories, poems, and illustrations by other authors and artists!

If you’ve been around my blog for at least a year, you’ll remember last year’s anthology, 3-4-1: Three Tales Told Nine Ways. Paper & Kindling is the next anthology in that series. It has all new content but follows the same concept as the first anthology! Every story or poem in a section took inspiration from the first entry in that section, as did the artwork. It’s a fun collaboration, and I’m happy we were able to bring in some new writers and artists this time as well as keeping some from the first collection.

For more information about this collection or past or future ones (including how to submit your work if you want to participate in a future volume), check out the 3-4-1 Publications website.

Paper & Kindling is a great mix of stories, themes, and styles that you won’t want to miss! You can check out the “Look Inside” option on Amazon to tell I’m not just saying that. It would be a great holiday present for yourself and any voracious readers in your life. As always, if you enjoy the collection, please rate, review, and share it with others! 🙂

Surprise! Nicole had so many thoughts and feelings about the Ghostbusters reboot that she decided to do a BONUS video this month. All rules are out the window! Longer, choppier, and MORE FEELNALYSIS.

This month I talk about feels from an adult fiction book! I know, I can hardly believe it either. Here’s my feelnalysis for The Lover’s Dictionary by David Levithan:

Posted on August 1, 2016 by Nicole DeGennaro

Another OWL reviews from La Toya! Check out the video below for her feelnalysis of Perfect Ruin by Lauren DeStefano:

Nicole has been waiting FOREVER for this book to be out, so of course she was going to give you her feelnalysis of it: The Raven King by Maggie Stiefvater, the last book of The Raven Cycle series.

I’ve been writing for a while now, and I’m still waiting for it to feel like an organic part of my life. I’ve tried the “make it part of your routine” and the “do it when inspiration strikes” approach. And all I’ve learned is that you can’t force it, not really.

You can struggle to string a few words together into a sentence if you try hard enough, so in that sense you can force it. But there’s a fine line between powering through writer’s block and wasting your time. There are instances when even as the words are being put to the page, you know none of them are going to make the cut. In the past I’ve convinced myself that bad writing is always better than no writing, but now I’m not sure that’s true.

I’m deep into the second volume of 3-4-1 now. That means I’m writing four stories on a deadline. Usually I work well to deadlines. But this time, after I started and stopped my second story about three times over two weeks with the due date ticking closer, I realized that sometimes no writing is better than bad writing. And here’s why:

That period of no writing isn’t always a waste. Trying to shortcut the brainstorming process and write the idea anyway can hurt more than help. But no one else can tell you when it’s brainstorming and when it’s procrastinating—you have to be honest with yourself. On the flip side, don’t let others convince you that deciding not to write for a day or a week or a month is automatically laziness. It’s your idea and your writing process—only you know what will work.

The problem with trying to write an idea when it’s not ready is that you might commit to the half-formed idea and stunt its full potential. Sometimes how something looks when it’s still growing isn’t close to how it looks fully formed: like a caterpillar to a butterfly. When you come in halfway through the process and try to interfere, the results might not be as good. Where you force the idea to go might not be as interesting as where it would have gone on its own.

The first two starts of my aforementioned second story I thought were good ideas, but they both stalled shortly after the beginning. Because of the deadline, I felt I had to write every day or I was wasting time. Now that I’ve finished that story, on the third try and with a concept completely different from the other two, I think those other two starts were the real waste. Those fragments will probably never become larger stories in their own right because their themes were the basis of the third story.

The words I forced out distracted from the brainstorming instead of contributing to it. I lost weeks of time trying to force one of those other two stories to be something, dammit! Maybe the third and final idea still would have taken that long to come alive, but maybe the time I used trying to harvest these other ideas before they were ready detracted valuable time from the actual final story. And maybe those other two ideas would have become other great stories in the future if I had just left them alone for a little longer.

Of course, waiting until a story is ready is all well and good until there’s a deadline involved. It’s a hard balance and an individual one. Some massaging of the idea, some forced brainstorming, and yes, maybe some bad writing, might all help speed the story along. It depends on how your own creative process operates. But overall, I’ve been trying to de-emphasize “productivity” in the sense of producing something tangible. I’ve been trying to redefine it to give mental productivity its fair weight.

I don’t want human lives to be measured in the obvious things we do or the tangible things we create or the money we earn. I want the benchmarks to be happiness, fulfillment, contentment. And for those measurements, I think the quiet moments are as crucial as the active ones. I think that’s doubly true for every kind of creative process.

I might be wrong. I’m not a rich, world-famous writer, after all. Maybe there is something in sitting down for hours a day, if you have that time to spare, and forcing words out even when they don’t want to come. Maybe that is how fame is achieved. Maybe fame isn’t what I want, then.

The book feelnalysis keeps on rolling for 2016 with La Toya’s review of The Husband’s Secret by Liane Moriarty.